"Thought I ditched you." — Carmen Cortez

As you can tell, this article is a ditched stub. You can help the Spy Kids Wiki by expanding this article.

Spy Kids
Spy Kids 2: The Island of Lost Dreams
Spy Kids 3-D: Game Over
Spy Kids: All the Time in the World (cameo)

Isador "Machete" Cortez is the oldest brother to Gregorio and Marissa Cortez, as well as the uncle to Carmen and Juni Cortez, and is an expert gadget inventor.

In Spy Kids, Machete is first seen in a flashback, at his brother's wedding. It seems as though Gregorio and Machete have a lot of conflict between them.

When his brother, Gregorio and Gregorio's wife, Ingrid get captured by Fegan Floop, Carmen and Juni visit him, hoping he will help them to save their parents. Machete refuses to go after Gregorio, but allows his niece and nephew to stay with him, and shows them a one-passenger jet that could get them to Floop's castle. Later that night, Carmen and Juni sneak out of bed, take the map and some of his gadgets, and fly the jet to the castle.

Machete appears near the end of the film, when he decides to help the Cortezes against Mr. Lisp's army of robot children, which Floop reprogrammed to attack Lisp, Ms. Gradenko and Minion instead. When asked why he came back, Machete claimed it's the same reason he left. Gregorio no longer remembers the reason and neither does Machete. Machete then cries in his brother's arms. 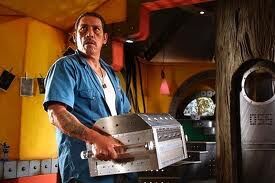 In Spy Kids 2, Machete later builds Carmen and Juni a high-tech treehouse after they became secret agents. Machete then shows some of his latest gadgets: the Spy Watches and the Machete Elastic Wonder.

At the end of the film, Carmen claims she can't sing so Machete shows Carmen a Microphone that auto-tunes her voice and Juni a guitar that plays itself. When they are done, Machete informs Carmen that he did not put any Batteries in it and Carmen was actually singing.

In Spy Kids 3, Machete appears near the end of the flim when he helps battle the Toymaker's video game robots. After the battle, Machete becomes closer with the Cortezes.

Spy Kids: All the Time in the World

In Spy Kids 4, Machete makes a cameo appearance where he is seen tripping in a laboratory when time is frozen by Danger D'Amo, a.k.a. the Timekeeper. In a deleted scene, while Cecil and Rebecca are running from two OSS agents, they end up in his laboratory, managing to ruin several experiments. As they are found by Machete, he hides them from the OSS agents.

Machete Cortez is a gruff man that originally did not care much for his brother or the rest of his family, similar to Carmen's early thinking. Later, he shows more compassion and chooses to help his family becoming particularly fond of Carmen and Juni and builds them new spy gadgets.

Retrieved from "https://spykids.fandom.com/wiki/Isador_%22Machete%22_Cortez?oldid=14024"
Community content is available under CC-BY-SA unless otherwise noted.