April 20, 2018
Spy Kids: Mission Critical is an American-Canadian computer-animated television series[1] based on the Spy Kids franchise with Dragons: Race to the Edge writer FM DeMarco as head writer. The show follows brother and sister team Juni and Carmen Cortez as they attend Spy Kids Academy, a top secret spy school for kid agents. It is the very first animated series in the franchise. The series premiered on Netflix worldwide on April 20, 2018.[2][3][4] Season 2 was released on November 30, 2018.[5]

The series is a reboot of the franchise, having no continuity with the previous movies before it and having its own style and attitude.[6]

The series centers around brother and sister team Juni and Carmen Cortez as they attend Spy Kids Academy, a top secret spy school for kid agents. When a new counter-spy agency threatens the safety of the world, it will be up to junior spies Juni and Carmen to train and lead a team of fellow Spy Kids cadets against the forces of S.W.A.M.P. (Sinister Wrongdoers Against Mankind's Preservation) and their diabolical leader, Golden Brain. The Mission Critical team may not be ready, but they are the only ones to call when grown-up spies can’t do the job.[7]

What if grown-up spies can't do the job? It's up to junior spies Juni and Carmen Cortez to defeat S.W.A.M.P. in an animated series based on the films.[8]

In this animated spinoff series, Juni and Carmen Cortez must battle the evil organization S.W.A.M.P. -- without the help of their super-spy parents.[8]

The Mission Critical kids take their fight inside the academy when a mole sent by Golden Brain seeks to retrieve the all-powerful Pinnoquinox serum.[8]

Attention, O.S.S. agents! The world and its citizens are in grave danger. A new villain has ascended to power in the counter-spy community – his name is GOLDEN BRAIN and he is determined to take over the world with his nefarious counter-spy organization, S.W.A.M.P. (Sinister Wrong-doers Against Mankind’s Preservation).[9]

With the agents of the OSS out of commission, it's up to the kids of Mission Critical to save the world from the villainous Golden Brain and S.W.A.M.P.[8]

The series was announced by Mike Fleming Jr and created by Michael Hefferon and Sean Jara on May 6, 2015, with the villains being described "as colorful" as the protagonists, and the series is said to contain "as much comedy as wish fulfillment."[16] FM DeMarco will be head writer of the series.[7] WOW! Unlimited Media Inc.'s Vancouver-based Mainframe Studios, the TV division of Rainmaker Entertainment, was partnering with the Weinstein Company to produce the series[2][17], with the series being described as a "multi season commitment".[18] DeMarco stated on Twitter that he has had "many inspirations for the series but it has it's own very specific style and attitude".[6] He also stated that it will have a nice mix of all kinds of humor, and it will have great characters old and new.[19]

In August 2017, a load of new information, including cast, crew, episodes and logo, have been leaked on its IMDb page.[12] That same month, Ashley Bornancin, Carter Hastings, Travis Turner and Christian Lanz announced on Twitter and Instagram that they would be voicing Carmen, Juni, PSI and Gregorio respectively.[10][11][13][14][15] On March 29, 2018, DeMarco uploaded a video on his Twitter showing Tom Kenny recording his maniacal laughter for his character Golden Brain.[20] On April 1, he uploaded another video showing Caitlyn Bairstow recording a line for her character Glitch.[21]

The first trailer released a week before the show's premiere, with mixed reactions.

The series debut on Netflix on April 20 with mixed reviews from critics and audiences, and mixed to negative reviews from fans of the original films complaining about the animation, changes of the characters, and timeline, but praising Bornancin, Hastings, and Kenny's performances as Carmen, Juni, and Golden Brain. 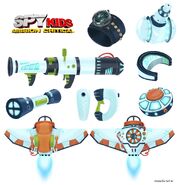 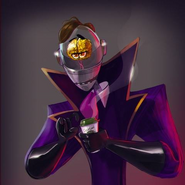 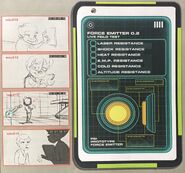 Promotional poster for the main protagonists, Juni and Carmen

Promotional poster for Juni and Carmen

Promotional poster for the Cortez family

Promotional poster for Juni and Carmen 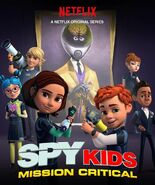 Promotional poster for PSI and Davebot

Community content is available under CC-BY-SA unless otherwise noted.
Advertisement